Many years ago I had a wonderful day out with my newly acquired father in Law, Dud Foweraker.
Dud was a conservationist and environmentalist from his very young years.
In about 1973 the Murray River was in some degree of flood or high river.
Near Paringa,near Renmark is an Island called Goat Island.
I am not sure that it is still an island these days due to the drying up of a channel around it.
Some years earlier than 1973 I believe the island was stocked with some Koala Bears from the former
Koala Farm in Adelaide which had been closed.
On this particular day I went out in a boat with Dud and his friend Ray Grimshaw in an aluminium dinghy to see how many Koalas had been separated from the island by the flood waters.
Paringa Paddock was quite flooded and navigable by a "tinnie" at the time.
It was great motoring quietly through the flooded gum and box tree forest.
There were in a few places overhead, Heron's nests with young birds peering down.
I managed to get a few reasonable shots on my old Pentax Spotmatic.
We located a large male bear who appeared to have been stranded for some time in a tree not far above the waterline.
We had a red washing basket on board.
Dud managed to lassoo the bear who growled quite loudly and bundle him under the basket and then into the back of the boat.
He sat there holding onto the side of the boat with one hand until we managed to put him ashore back on the Island.
Below are some pics I took of the proceedings. 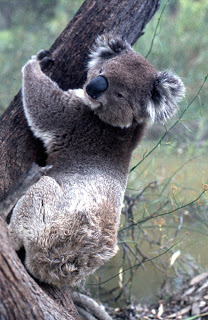 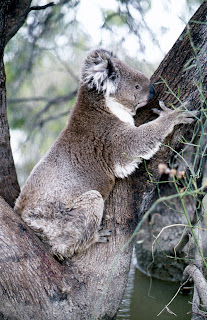 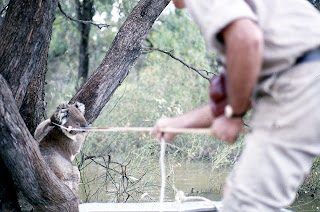