Car of The Week

A little while back my wife and I paid a visit to the Australian National Motor Museum at Birdwood in the Adelaide Hills.
A bonus when you take grandchildren on outings is you get to visit lots of places you might not normally programme into your schedule. This Museum is a world class Motor museum almost on our doorstep and I had never been.
So it is my intention to post a car of the week or vehicle of the week from here on in for a while.
This first car is almost identical to the first car our family ever had.
My Dad bought one of these in the 1950's second hand and he gave it a paint job himself similar to the one in this picture.
When he eventually sold it it was to a young lad for about $50!
When I explore my archives and get good at putting old 8mm movies and slides on the web I'll show you some original images. 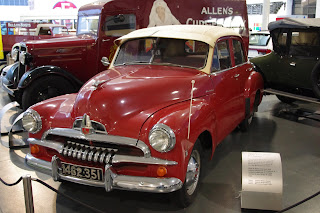 It is a Holden Sedan. FJ model. Ours was an FX  which was the earlier and  first Holden produced in Australia.These cars were every where in Australia in the 1950's and 60's and very popular and affordable.
Posted by Geoff Thompson at 12:09 AM