What Colour is your Parachute? 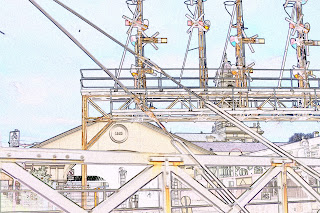 At one time I was an Employment Counsellor in the Australian Government, A Rehabiltation Counsellor and also a Customer Service Officer working with mainly Un-employed people.
I monitored their participation in the work force and also their compliance with rules and regulations required to be followed in order to receive un-employment benefits.

Apart from 5 years working in Public Relations I was involved in these fields collectively from 1980 to 2010.

I first got involved in such things in 1980 when I was the Principal Recruitment Officer in Telecom Australia now called Telstra.
Telstra is the main telecommunications carrier in Australia and part owned by the Australian Government.

When I worked there it had a monopoly on Telecommunications before the de-regulation of the industry.

While involved in recruiting new staff to the organisation it was coming across my desk that there were many existing staff suffering from workplace injuries, many musculo skeletal and some of a psychological nature.

Then in the 1980's a phenomenum called RSI (standing for repetition strain injury), landed on the doorstep.

This was as a result of initially the impact of fast data entry and using computer keyboards on a largely un-prepared workforce.

People were getting severe pains in forearms and hands and shoulders.

There were many claiming compensation for this and myself and a colleague formed an in house rehabilitaion unit which to our knowledge was the second such thing in the country.
We believe (General Motors Holden) had  something similar in South Australia before us.

My colleague, a social worker had had experience in the past in rehabiltation  of Alcoholics and his knowledge and with much background reading, interviewing injured staff and Rehab Professionals, we formed our own innovative Rehab Section in South Australia in Telecom  that was soon picked up nationally Australia wide.

We did have some considerable success in those early days and now Comcare uses a similar model to this day in Government Departments.

Early Intervention was a key factor.

I saw many people with chronic problems(RSI) and there was much debate of how much of it was real and how much was psychosomatic.

The pain was certainly real and now of course ergonomics and Occupational Health and safety are important issues  in any workplace and there is much legislation to see that standards are met.

A relative of mine now has his own company that is involved in training in OH&S in the work force.

http://www.humandymensions.com/
Rob is the brother of Graham Long who features often on this blog as the Pastor of The Wayside chapel.

This was a major role change in my employment  direction.

Work Injury Management and Rehabilitation and then, later on with the Commonwealth Employment Service(CES) and Centrelink, counselling and assisting the un-employed.

As a Christian working in Secular Government Organisations it was a challenge to me to not overstep the mark and  tell my clients  that Jesus was interested in the un-employed and also those with injury and illness and Faith in Him may be more than useful.

One book that I was able to recommend wholeheartedly  was "What Colour is Your Parachute?"
It covers many bases in Jobseeking, Job Tenure and Career Change and also what part faith can play in dealing with un-emeployment and setbacks in the workplace.

It has been in publication for about 42 years so you can guess it is a quality production.

See a link to a discussion with the author on the "Christianity Today Website".

Also I recommend the article  I have read today on the same website.

So for those who are umemployed, been made redundant, struggling with illness and injury and disabilty I recommend the best support there is .

Jesus and His disciples who may be just around the corner to help you.

There are also good people Christian or otherwise that can help you.

A good tip is don't blame others for your situation, they may be at fault but the "blame gain" will always delay recovery while it is in play.
Indeed while blame and un-foregiveness are held onto there may never be healing and resolution.
The following few lines may also be helpful in dealing with un employment.

It is  by God’s  will
I am in this place today.
Accept the situation ,
Don’t ignore it.
Make your mind up
to face reality.

God will keep me here
In His love and grace
In this trial-----
To behave as His child.
No self pity, no self –sympathy.
To take control of the situation.

God will teach me the lessons
He intends me to learn,
Work in me His grace.
He can turn this trial
to victory

In God’s good time,
He can bring me out again---
How and when He knows