The Cross of Christ

THE CROSS OF CHRIST

Transcript of the above taped sermon by Frank Hunting
At the Church of Christ Grote St. Adelaide 1970's


You would have to admit that for many of us who are Christians,The Cross of the Lord Jesus Christ is an historical event.

Something that happened 2000 years ago.

And we know too, that whilst He was hanging there ,on the Cross He was dying for our sins.

We’re very clear about that. And our understanding, is pretty right as far as it goes. Now the operative words are those last words.

Our understanding might be quite right, nothing to complain about, nothing to find fault with, “as far as it goes.”

But this looking at the cross of Jesus historically, and it is the only way that many Christians look at it.

You challenge me and you say how do I know this?

Well I know it!

I know it by the way some Christians live!

I know it by the way they speak!

I know it by the way they are so ready to condemn!

By our living, men and women know that however accurate, however right we are, concerning the historical events around the cross of Jesus, it’s obvious by what we are ,that we, personally, have never knelt before His Cross, and looked up into His face as He was dying there.

The cross of Jesus begins for most of us to have a profound effect upon us the day or the time we take ourselves, and what we are, and we kneel before his cross as he hangs there.

Until we do ,this personally and individually, the Cross of Jesus is mostly and mainly an historical event. A thing that happened 2000 years ago.

As we kneel , and look up into His face, the face of Jesus as He hangs upon His cross , we see someone who utterly died to self, and as we look at Him and as this realisation begins to come home to us ,

I can assure you we are shaken to the very core, and not only are we shaken , but ,

we are scared ,we are frightened to death by that terrible challenge to self.

As we look into His face we begin, and often it’s only a beginning , begin to see how controlled, we are, by self.

We begin to realise how demanding self is.

That I always want to be first!

That I always want to get the biggest!

That one way or another I’ll scheme to get the best!

Give me the chance and I’ll put myself before you!

Driven by self ,all these ugly things as you kneel there, start to come home.

And you know that the Son of God is dealing with you.

When we kneel and look up into the face of Jesus on His cross, we begin to realise what Love really is.

for it’s not a part of our natural selves,

we have none of this in our own natures,

we see Love for men who put Him there in that frightful death,

I’ve looked at those fellows ,

I think I know them !

I think I understand them!

I know that you and I are apt to think that a man like Barrabbas,

a man who in an insurrection at the head of a rebellion is prepared to plant bombs,

and do all sorts of things that will injure innocent people,

I know that we are apt to think that he’s a really wicked man.

doesn’t even begin to be as evil as men like the high priests.

Who under the cloak of religion,

and literally do sell their souls to the Devil!

In the blindness of their hatred!

But it’s all so smooth ,

AND JESUS LOVED THEM!

HE LOVED THEM, and He died for them.

I think when you and I come across it, one of the hardest things we have to tolerate is self righteousnous amongst Christians!

It’s one of the hardest things to put up with.

And you and I can’t understand that,

unless we have been to that Cross,

and where we’ve knelt, and we begin to know what the love of Christ really is.

As we kneel there, at the Cross, we begin to realise what it means to die to all rights to oneself.

For here as you look up into His face, you’re plagued by a terrible knowledge.

Aah yes it hits you like a sledge hammer right in the face!

That here is a man who has the power to call down from God, from Heaven itself, 12 legions of angels and He can wipe out every man , every person who has anything to do with putting Him there!

And He dies utterly,

Kneeling there, I begin to remember all the times and all the ways that I have insisted my right, on getting what I thought people had owed me.

And what I thought they ought to do for me.

And there before His Cross I see how hideous that is.

How utterly hideous that it is.

And I think of the times that I stood on my dignity and insisted it be given to me what was my due.

My head goes down in shame.

And if we kneel at His cross long enough, we know, I know, that only Jesus can change this inbuilt determination to have my right to myself.

As we kneel at the cross of our Saviour, if we ever do, we get a completely new dimension, of how total forgiveness has to be.

Some people, we may be prepared to forgive, but others, no!

Not after what they’ve done!

Not after the way they’ve used us!

Not after the way they’ve spoken about me!

No! that’s asking too much!

You ask me to forgive?

But I tell you, that if you kneel there at the Cross, you will know, and not only will you know, but you will want that your forgiveness of every person that breathes, or has breathed, that’s come across your path, that forgiveness to be total! 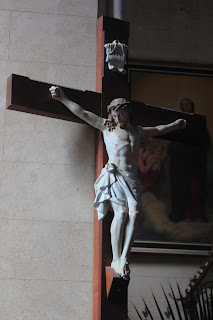 And from the depths!

You can’t look up into His face, on His Cross , and not want it otherwise.

As we kneel at the Cross, at the Cross of Jesus and look up into His face, we learn something about prayer.

Among other things we learn that evil men need our prayers.

Did you hear that one?

We learn that men doing evil,

need our prayers, my prayers.

Of course they need the right kind of prayer.

Devoid of all bitterness.

That God, may be able to answer our prayers.

If someone is your enemy,

if someone is maligning your character,

if someone is having a go at you,

if someone is mis-representing you,

accusing you of things you never did,

and things that you are not responsible for,

of course as you look into the face of Jesus,

you must pray for those people.

But! Let me warn you,

don’t pray for those folk,

unless you have, or are kneeling at His cross,

and you’re looking up into His face,

because if you pray for such people as I’ve just mentioned,

before you’ve been to the Cross,

you will pray with hurt in your soul,

you will pray with hardness and not love.

You will be remembering what they’ve done!

And not looking in to the face of Jesus,

you will have a sneaking desire for God to deal with them!

As they really deserve!

And you may be praying out of duty!

Because you are commanded too, and not out of love.

And your prayer won’t get further than the ceiling of the room you’re praying in.

As you kneel at the cross of Jesus,

you know here is someone who is willing to suffer terrible injustice,

and He utters no word to justify himself.

They have twisted His words, they have trumped up untrue charges.

All justice in the world died that day when they put Jesus on the Cross!

And only injustice reigned supreme!

and He never uttered a word!

How often have you and I been busy,

oh yes I’ve been it,

To make sure they get the right impression about me,

I don’t care if they get the right impression about you,

I’ve got to see to it that you’ve got the right impression about me!

“Lord!” on his knees and with tears falling on the paper on which he was
writing,

“Lord deliver me from this curse of always wanting to justify myself!”

I know why he wrote that prayer, he was kneeling at the cross and

looking up into the face of Jesus.

it , without any criticism or condemnation in your heart, perhaps after a

you say with me that you don’t know a Church in the land, this lovely

land of ours where that Church, that little group of people , that

congregation, does not need to get itself to the foot of the cross of Jesus.

Can you think of one Church that doesn’t need to do that?

Do you think with me,

if we as individuals,

individuals of this congregation,

if we got ourselves up , and took ourselves to kneel at

the foot of the cross of our Lord and Saviour ,

and looked into His face,