Today Lesley and I attended the funeral of the late Eric Finck.
Eric was 98 years old.
We first met him and his wife Florence and family at the Church of Christ at Grote Street in the 1970's.
Eric was a very scholarly and wise Christian who influenced many lives including our own.
He became an elder at the Grote Street Church and then Elder Emeritus.
Eric came to Jesus as his Lord and Saviour through the late F.C.Payne who was the author of a locally produced and best selling book, "The Seal of God".
Here is a link to a PDF version of The Seal of God.

The mantle of reprinting and revising the book fell on Eric's shoulders when Mr. Payne died.
One of Eric's loves was wildflowers and native  orchids and photography of these.
He took many slides over the years and used to give talks to groups on the marvels of creation using his slides as illustrations.
I was privileged to spend about an hour with Eric about a month ago looking at some of his digitised collection and talking about the images.
Here is what was written on the service programme today.

"A man with a deep profound faith in the Lord Jesus Christ.
A man of integrity,compassion,humility and love.
A faithful servant,a man who walked with God.
Loved and respected by all who had the privilege to know him.
Assuredly today he would have heard these words.
"Well done, good and faithfull servant."
Resting now in his Savior's loving arms.
Till we meet again in Glory."

It was a fitting tribute to Erick and his life.
There were many in attendance.
His daughters Trish,Fran and Christine delivered the eulogy.

Below is a recent pic I took of Eric at his home.
In his younger days he was a  keen collector of mechanical toys.
We had an enjoyable time winding them up. 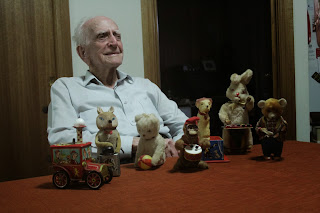 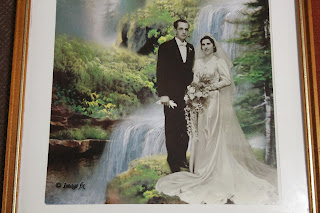 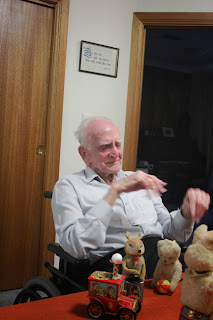 Posted by Geoff Thompson at 5:44 PM