In about 1977 my good friend Dave Hughes and I came up with the idea of going on a canoe expedition in the creek system just north of Renmark.
I knew of these creeks through my late Father in law Dudley Foweraker who had grown up with these locations as part of his young years and later as a family we visited these spots often for chop picnics and afternoon teas.
The creeks, well known to locals,are the Ral Ral,Hunchee and the Amazon.
The Amazon  is quite a short connecting creek to the Murray River but very picturesque.
We did two of these trips and later on I took my 3 young sons on a shorter version of the same.
On one of these trips the river was very high and a lot of the creeks running off the main ones had water when they were normally dry.
This was great to explore but often we had to canoe under fallen trees or walk around them.
I managed to get pics which are shared here.
I was probably using my Pentax Spotmatic or a Practika SLR.
The longest lens I used was a Hanimax 135mm.
Scanned from slides using an Epson v700 scanner.
I was usually in the back of the canoe and whoever I was paired with constantly complained as I would stop paddling to get a shot.
I think we did this trip over a 3 day weekend.
On one of then I got very badly sunburned legs. 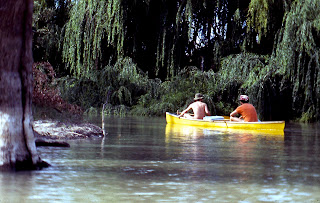 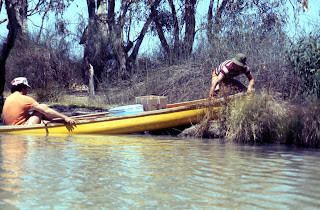 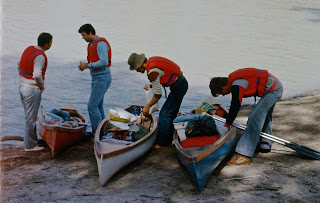 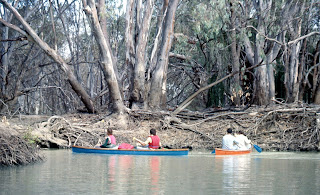 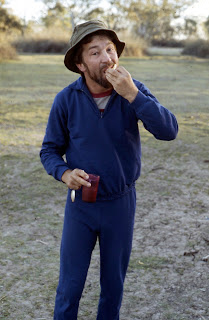 Posted by Geoff Thompson at 1:44 PM