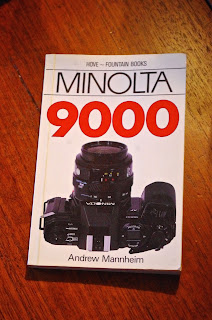 One of my dream cameras when autofocus film cameras were entering the market was the Minolta 9000.
The Minolta 7000 was the camera I think that really got autofocus off the ground in Australia but the 9000 was the fully specced up professional version.
I was a mainly pentax user but had seen the results of one of the entrys in the Telecom Grand Prix Photograph competition ,that I had oversight of, where the photographer was using a Minolta 9000.
I was impressed.
I also read an article in a pro photo magazine where a  wedding photographer had shot a whole wedding on a Minolta 9000 with the camera and flash all set on auto.
He was boasting about how even and consistent his exposures were.
I wasn't all that impressed with his shots but the idea appealed to me.
Well the opportunity came to purchase a used one from a camera store in almost mint condition.
I still have the camera and some lenses and the program flash 4000F.
I used it mainly as back up camera in weddings as I had a comprehensive Pentax set up.
The camera is still one of my favourite film cameras.
The book by Andrew Mannhein on the camera is well worth purchasing.
.It tells you everything about the camera and it's accessories.
The auto focus is very slow by today's standards but it has many professional features.
Get one if you can and want a good professional 35mm  film camera. 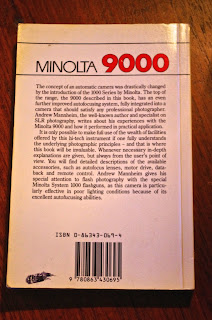 Posted by Geoff Thompson at 5:35 PM