Putting Christ back in the News 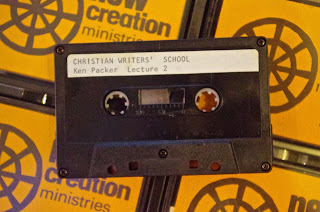 While recovering from some surgery I have been digitising some more of my tape collection.

Some time, ago in the 1980's, I enrolled in a correspondence course in Christian Writing.

It came with a set of 10 lessons on tape produced by Ken Packer in association with New Creation Ministries.

This was an Adelaide based course.

I wasn't able at the time to continue with the course but learnt a lot from the tapes which were produced during the "live" version of the course.

It was in the days well before the internet and blogs etc when newspapers and magazines and radio and TV ruled the news gathering world.

Notwithstanding that, there is still much to be gained by listening to the tapes and in someways I think they  influenced me in starting this blog.

I have it on order at the present.

You can still access Ken's writings at the link below.

"Ken Packer.  In 1980 Ken began a monthly Christian column in his local suburban newspaper. In 1985 he began (and still writes) a weekly Christian column for country newspapers.  In 1986 he published his book “Putting Christ back in the news” to explain a local church’s role in public relations and Christian journalism. Click here for Ken’s articles "

I have found there is also a similar free course online at the link below by Fiona Veitch Smith.

I would love to hear  from anyone who did the course and what they did as a result of completing it.

One of my neighbours, Rob Ferguson also did the course back then.

His "tree of life ministry" is featured on this blog.

Posted by Geoff Thompson at 3:06 PM