"Stealers of Sound" sounds like a copyright issue over a pop song or illegal pirating of music.

Well the birds have been doing this for centuries apparently.

"Stealers of Sound" is a chapter in a book by the late A H(Alec) Chisholm , one of Australia's best earlier writers on birds and natural history.

The book is called "Bird Wonders" of Australia.

I am sure you can still pick these up in used book shops.

The chapter on this topic is talking about birds who mimic the calls of other birds.

The most well known in Australia is the Lyre Bird but many others do the same.

Chisholm wrote a wonderful book called "The Romance of the Lyrebird" where the habits and details of this bird are brilliantly written,.

Also I have written on this blog about "The Lore of the Lyrebird" by Ambrose Pratt.

The Mocking Bird overseas is famous for it's mimicry also and many other overseas birds do the same.

So here are some "stealers" that Chisholm talks about.

At the time of writing his 5th edition he claims that there were no fewer than 52 species in Australia that do this.

Below are some he mentions in the book.

I googled the subject of "Australian Birds that mimic others" and came up with the link below which also aludes to Chisholm's work.

Some more information can be found there.

For me, I like trying to imitate bird calls, my favourite being the Kookaburra.

I was photographing one in a park recently and I decided to do a mock call so he would turn his head and I would get a better shot. 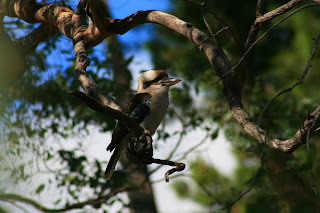 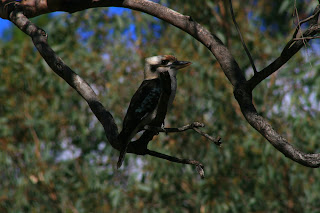 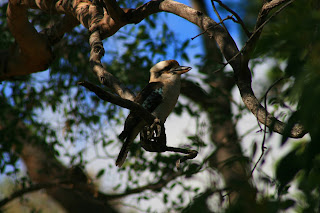 Alec Chisholm says the Kookaburra, in the early days of Australian settlement was called the "Giant Kingfisher" and then became the "Laughing Jackass" and the "Settlers Clock".  "Kookaburra" became its widely accepted name from an Aboriginal language.
Chisholm gives 45 other Aboriginal names used by different tribes for the same bird.
He says that is not an exhaustive list.

Posted by Geoff Thompson at 8:03 PM