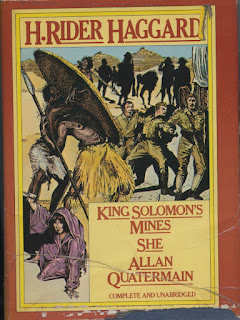 I have recently embarked on a programme of reading some of the books in my collection of classic stories by classic authors.

They tell us that too much "screen" time is really not good from a health perspective especially as you near bedtime.

So now each night I am determining to do some catch up reading.

I am currently reading "She" (She who must be obeyed)  by H Rider-Haggard.

Some are books I loved as a young person and some by the authors of those books that I haven't read.

Some authors  in my collection include:

These are all authors I have read some of their most famous stories, but they have a great deal more
on offer than just their best sellers.

They weren't just one hit wonders.

The  story of "She" is absorbing and very much in the genre of lost cities and tribes,Goddesses and Mummies and the like.

What strikes me about the book is that the writer is so good to paint word pictures that conjure up scenes just as good as any modern day adventure movie that  your imagination  supplies the images in vivid detail.

This is the art of any good novelist really.

In a 1930's movie of "SHE" which you can watch on youtube they have recreated a few scenes quite faithfully but have strayed from a direct retelling of the story.
It does give you the gist of the story though.
I enjoyed it.

My Aunty Alma was a keen reader and writer and student of literature.

She was always encouraging me to write.

She told me that any good writer's aim should be to point people to God.

I will write about Aunty Alma in a future post.


From reading Rider Haggard's books and about him on google it is not hard to conclude he was a Christian but had an unhealthy interest in re incarnation( which is not Christian).

There is much Christian or Biblical imagery in his writings and he ponders some of the great questions about faith,creation and existence in the book "She".

There is a scene in the book( I won't spoil it for you) dealing with the meaning of life  where there is a mighty rushing wind and flames of fire.

Evokes images of the day of pentecost.

The fire in this instance is also a purifying fire of Judgement.

Both amazingly beautiful,beguiling, evil and seductive.

The book really seems to point to a struggle with his faith going on in the mind of the author.

The themes of temptation, forgiveness and revenge and justification of our own sin are truly there.

Haggard would have done better in some ways,in my opinion. to write directly about the great themes of the Bible.

But then these classics of English literature would not have existed.

you can read the whole book on project gutenberg at the link below.