"My Grandma's Bible" by Geoff Thompson 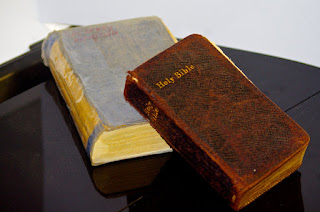 Grandparents can be an amazing influence on our lives.

And if we are Grandparents ourselves we have a huge role we can play with our own grandchildren.

My Grandmother died when she was 76 of a heart condition.

She was only a few years older than what I am now.

She came to our wedding in 1971 and then died a few days later.

Grandma was a quiet, gentle English war bride from the 1st World War.

My Grandfather was in England and Europe as an Australian soldier.

They married in England and then moved back to Australia with their first child coming with them.

When I was 8 years old Grandma gave me a Bible.

It was the first Bible I ever had and I still have it.

I tried to read it back then and had been to Sunday School but I wasn't really able to get into it and understand it except for the basic stories I had been taught.

After she died I came to own her own small pocketable Bible.

I still have it.

I don't know how she read it.

In her Bible she had underlined many verses.

As I am now a Christian I understand the emphasis of the passages she underlined and I think
how lovely it would be to now have a talk about the the things of God and her faith.

The influence of Godly Parents, Grandparents and Relatives can have an amazing result long after they are gone.

I believe she would have been in prayer for her family and Grandchildren in particular.

Often when we pray we may never see the results of prayer in our lifetime but prayers are eternal and I am sure many are realized.

Here are the passages she had underlined in her Bible.

John 1:12 King James Version (KJV) 12 But as many as received him, to them gave he power to become the sons of God, even to them that believe on his name:

If you put these passages into  the Bible Gateway you can read them for yourself.

Better still look them up in the Bible.

Are you determined to be special in the life of a child?