Why not be a Preacher? a book by Dr Arnold Caldicott

"Why not be a Preacher?"

That is the name of a book by the late Dr. Arnold Caldicott.

At one time he was our minister at the Church of Christ at Grote Street Adelaide.
That was where he last ministered before retirement.
His late wife Alice was also a wonderful supporter .
They were a great team.

He was an evangelical protestant minister and passionate about His calling.

He wrote this book and a couple of other books:

"The Gospel under Canvas"

Arnold Caldicot was my Minister for a number of years at the Grote Street Church of Christ.

He was a wonderful mentor and friend  to me and a great encourager.

He  was often encouraging me to become a preacher.

It is no small coincidence that later in life I've taken up that challenge and have become a lay preacher in both a Churches of Christ nursing home  and also in the uniting Church in Renmark, South Australia.
I fully Love doing what I do and realise that maybe I should've done so a bit earlier.

Arnold had a big booming voice and there's no way I could  replicate that here but I'm just going to read a little bit of what he says in this book in the preface.

"why write this book?  because I'm convinced that young people need a book like this.
The years of youth  are decision-making years.
Great numbers of young people are lost to the Ministry because their questions are not answered.
Satan often wins by urging youth to settle for second best rather than the best for God.
And ministers need this book to remind them that recruitment for the ministry depends greatly on them.
No matter how heavy the load, ministers should not lose sight of recruitment and should allow time and effort for programming in this direction.
Where ministers take time and effort to encourage young people to give themselves to the preaching ministry, a stimulus will come into the life of the minister as well as that of the church."

Here are the contents headings for each chapter.

1.How do I recognise God's call.
2. Start by being a cadet preacher.
3. Preaching and The beginning: can I do it?
4.Try this for sermon.
5. Advice  on those college years.
6. Dos and don'ts for the preacher
7. Don't squib on the invitation
8.On ministering to a Church
9.On submitting a time sheet.
10. Your question: can I possibly take a funeral?
11.You can use this wedding service .
12. Then don't give up on God, expect a miracle
13. The preacher and the other woman.
14. Loud and clear on what Bible study is
15. Called to be an Associate. preacher:What then?
16.A letter of invitation- For you too!

Dr Caldicott uses many other resources to make this book.

Even in this day and age it is worth considering.

It may be just the challenge that someone needs to take up what God is calling them too.

You may find it listed on the second hand market, it was published in 1979.

I have a spare one for sale and will accept offers until sold. Perhaps $25(Au). 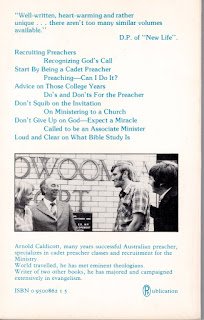