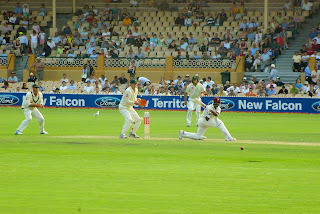 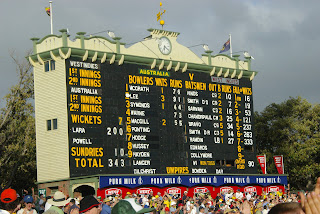 By Geoff Thompson
The Cricket season has now started in Australia. It is a summer sport and the various forms of football played in the winter.
As a young person I played a lot of Cricket . Some  people in some countries may not know much about Cricket but it is loved with a passion in England, Australia,India,Pakistan,West Indies,South Africa, Siri Lanka , Bangladesh, new Zealand and many other nations who have embraced the game.
The most traditional version of the game is Test Match Cricket  which can be played for up to 5 days maximum. There are shorter more modern versions of the game that can be played for a whole day or about 3 hours which cater for those who get bored over a five day game.
I live in Adelaide South Australia which has one of the most famous and picturesque  Cricket grounds in Australia. Unfortunately in the eyes of traditionalist like me they have modernised some of  the grandstands recently.
Each January there is usually a Test Match in Adelaide  and I try to get there for at least one day and indulge in one of my favourite pleasures. Sitting under the Fig trees watching the cricket, listening to the radio commentary, taking photos of the cricket and sometime during the day munching on a meat pie and drinking a coke.
As such I have collected lots of photos over the last several years and now it is a lot less expensive with the arrival of digital capture.
I used to take about 11 or more rolls of film in a day which used to get expensive to buy and process.
I have found that as a former player of the game ad also as an experienced photographer I am able to anticipate good action moments and capture shots as if I was actually out on the ground taking part.
I like to sit with my camera trained on the action and ready to click the shutter with every ball the bowler delivers.
That way you don’t always capture what you want but you could actually click the shutter with every delivery and get wonderful shots.
There is of course the thought that you don’t want to have the camera up to your eye all day as you do want to enjoy the day in a leisurely manner.
I have included a couple of shots out of many thousands I have taken.
The best way to learn this and other sports photography is to do it. IE practice! practice! practice!
I have recently been using a Canon 400d camera for this photography and now Pentax Kx and Kr.
When using film cameras I used a Pentax MZs and Pentax 645.(Medium Format)
A reasonably good telephoto zoom is essential but it does not have to be an expensive lens.
Including wide angle shots and scoreboard showing the state of play and significant stats of individuals is important also.
Just get out there and do it.
Posted by Geoff Thompson at 3:45 PM