What did Uncle Harry and Einstein have in common?

They both didn't wear socks.

Like Einstein he was an intelligent man but never wore socks.

I never found out why.

He was a man of great Christian Faith but a little eccentric.

He said " lawn was a waste of good dirt."

"If the music is not from a wind instrument then it doesn't count.

When he retired much was made of his no socks behaviour.

Here is a pic from his retirement function at Phillips Factory where he was a machinist.
They called him "socks" Dunning as he never wore socks.
He was gifted several socks on this day. 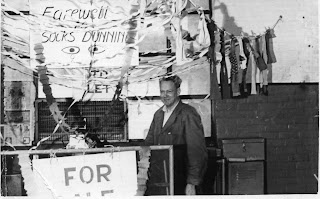