Talkin' about my Generation 6- Wally Wunnugmurra

In 1970 and 1971 I spent a year in Darwin. In that time I worked in the PMG department, played Cricket and Australian Rules football(AFL) and also spent the first 6 months of my marriage in Darwin.
I have many fond memories of this time as I have posted on similar articles on this blog.
One of my team mates in the Parap Wanderers Football Club was Wally Wunnugmurra. I never really knew how to spell his name back then so I hope i have it right now.
I was amazed by the standard of the players in Darwin and Wally was right up there with the best of them.
He was highly regarded in Darwin and his community.
I recently came across some letters I had written to my Grandparents while living in Darwin.
In one of the letters I gave Wally a mention.

"just a quick note to say howdy. As you can see we had a win on Saturday.Everyone went well and Wally Wunnugmurra took probably the best high mark ever taken"  16/2/71

The win would have been either against Waratahs or Nightcliffe.
They were the only two wins we had for the season.

Also there was a newspaper clipping which I have reproduced here.
Over the last few years I have seen his name pop up in Northern Territory affairs and from what I can gather he has fulfilled a lot of the expectations many had for him back then.

I was in awe of the abilities of players like Wally and Darwin and it's people left a lasting impression on me. 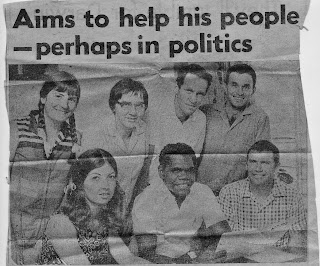 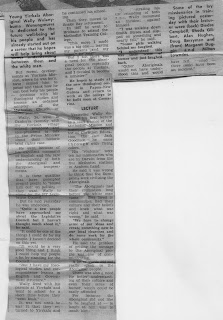