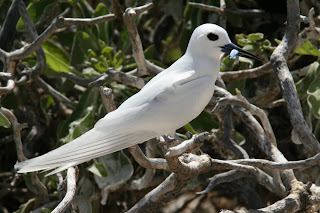 Last evening my wife and I went out with our "young marrieds group". This is a group formed when we were all young marrieds in the same church. None of us attend the same Churches anymore but we are all still committed Christians and enjoy each others company every 2 or 3 months.We are now either past 60 or not far off it.One couple were telling us about their recent holiday to Norfolk Island which is some distance off the East Coast of Australia.

I have always been interested in the Island but have never been .As I have an interest in Birds I enquired about the birdlife and discussion got around to the white tern of Norfolk Island.I decided to do some google research and read out the article below out loud to the group.

When I got to the last line I just lost it as it was such understated humour almost in the category of a "dad" joke.

I was crying I was laughing so much. You really had to be there.

The great thing for me though was that 2 years ago on one  our outings I was in such deep depression  that I did not enter in to discussion with the group at all and was unable to discuss how I was feeling with them.

One of the people to ask me that night if I was suffering from depression was a fellow sufferer at times of the same thing.

She was one half of the couple that went to Norfolk Island.

She was laughing too but the last time our group met she wasn't so good.

God is so good to give us close friends.

As you read this you may not have close friends to support you.

Jesus is the greatest friend to us all.

Reach out to Him and He will bring special people into your life.

These delightful, graceful creatures are known here as `Fairy Terns'. Snow-white but for their black bills, feet and eyes, they have translucent wings. The terns normally leave the island in May to spend several months at sea, constantly on the wing. However, some appear to have formed a love affair with the valley leading from Bumboras to the Shearwater villas and stay throughout the year. Around August 1st, their numbers swell and mating begins. White Terns build no nest and lay a single egg in a slight indentation in the branch of a Norfolk Pine or White Oak. It was once thought that they used a mucilage to assist the egg to adhere to the branch but this has been found to be untrue. The mother will somehow incubate the egg without dislodging it - you will notice that to leave the branch she drops off backwards. How the chicks hatch safely on this precarious perch is a source of great wonderment. If you look carefully at a tern returning from a fishing expedition, you will often notice up to five tiny flying fish in her beak which she has caught on the wing.
You will often notice two terns flying together, wheeling in such unison that they seem controlled by a single brain. The islanders will tell you gravely that this propensity to fly in pairs is because "one good tern deserves another".
Posted by Geoff Thompson at 12:08 AM