There was an article in the Adelaide Advertiser on 23/3/12 about how it is now believed "humans killed our big beasts".
It talks about new evidence that demonstrates that Australian extinct animals like the diprotodon and thylacoleo (marsupial lion) were made extinct by humans in Australia about 40,000 years.
Co-incidently I am currently reading a book by Charles Barrett called "Coast of Adventure"
In it he is describing a visit to Australia's North in the 1940's.
The book was published in 1946.
He describes anectdotely an encounter with what sounds like thylacoleo by a local inhabitant of Northern Australia.
Charles Barrett was a prolific journalist and writer on nature in the 1930's and 40's.
He was if you like an Australian David Attenborough of his day.
My late father in law who was an authority on Australian Flora and Fauna in the Riverland of South Australia actually corresponded with Barrett when he, Dudley, was about 16.

There is also reference in Barrett's account of the British Museum having knowledge of the Thyalcoleo at the time which is born out to some extent in an article about Richard Owen in wikipedia.

So my conclusion is that Thylacoleo may have been wiped out by humans in less than 100 years ago not 40,000.
After all the Tasmanian Tiger or Thylacene only become extinct in living memory.
It is a similar animal.

I have included the article from the advertiser and also relevant extracts from Barrett's book and other interesting links.

As a creationist or intelligent design advocate, (immediately some will switch off) it is always interesting to me that as I note new scientific discoveries events and dates are always becoming younger not older:
eg  the recent revelation that a recently discovered pine tree in Australia that was thought to go back millions of years is now contemporary and not ancient at all.

Here is a video  link to what it is believed they looked like etc.


Please note there is terminology used in this book that would not be used in this day. It was the common vernacular of the day, that was just how it was in those times. Reading Charles Barrrett's books he had a regard and love  for Aboriginal people that many men of his day rarely did. It is not my intention to offend anyone by what is reproduced here. 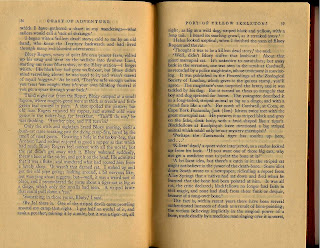 What do you think?

Posted by Geoff Thompson at 4:01 PM