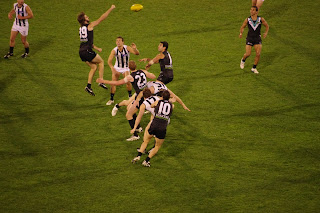 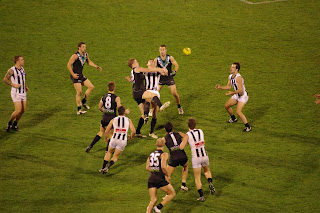 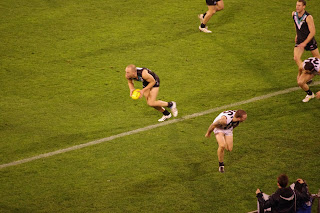 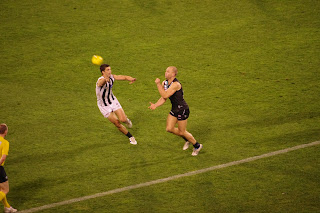 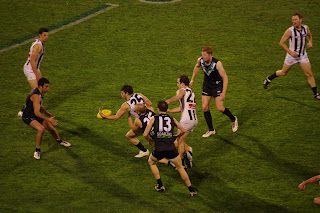 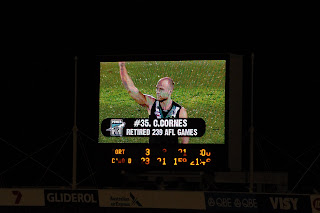 This was Chad Cornes last game after retiring.(Since this post Chad came out of retirement and is now playing  for the newest AFL team Greater Western Sydney)
Unfortunately the Power were thrashed by the Collingwood Magpies.Some pics from the game that was  at times played in very wet conditions.The photos have not been photoshopped or edited. They are straight from the camera and taken with my Pentax KR at ahigh ISO setting as the game was at night under lights.I simply used the P setting.
As a young person I played football(Aussie Rules)  in the South Australian National Football League  (SANFL) and also The South Australian Amateur League and The Northern Territory Football League(NTFL)In the SANFL I played with West Adelaide(1964,65,66,6 A Grade games) Postal Institute, Amateurs(1966 to 1972) Wanderers NTFL(1970/71). My main claim to fame was I won the Best and Fairest Player for my one season in Darwin with The Wanderers.With a football playing background and cricket I love all sports and still like to test my reflexes by capturing the action with a camera. Over the years I have taken many images from Adelaide Oval Test Matches and will share some on this blog at a later date,possibly during our local cricket season. I played locally with the West Torrens District Cricket club as a fast bowler.
Posted by Geoff Thompson at 4:43 PM